Qasem Soliemani, commander of the Iranian regime’s Revolutionary Guards (IRGC) Quds Force and head of the mullahs’ extraterritorial terrorist attacks, was killed at around 1 am local time in Baghdad, Iraq on Friday, January 3. U.S. forces carried out a drone airstrike targeting two vehicles transferring Soliemani and Abu Mahdi al-Mohandes, deputy chief of Iraq’s Tehran-backed Hashd al-Shaabi (PMF). The two were killed along with ten other companions and body guards.

Elimination of Qassem #Soleimani and head of Iraq’s suppressive Bassij force is irreparable blow to mullahs’ regime; Time to evict IRGC from the region #Iranhttps://www.maryam-rajavi.com/en/item/maryam-rajavi-elimination-of-qassem-soleimani-and-head-of-iraq-s-suppressive-bassij-force-is-irreparable-blow-to-mullahs-regime-time-to-evict-irgc-from-the-region … 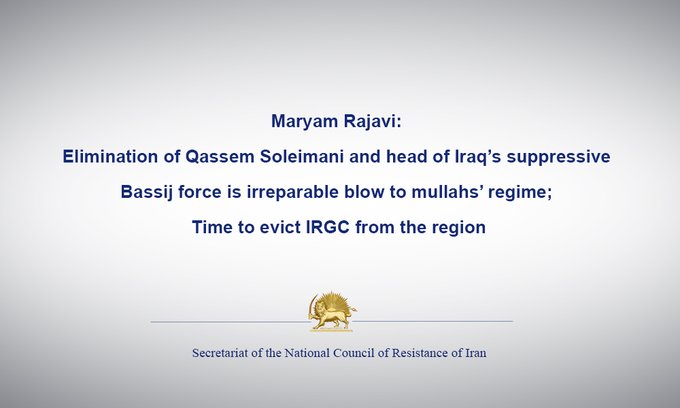 Soleimani was born on March 11, 1957, in a mountainous village of Kerman Province in south-central Iran. He left his village at the age of 13 after five years of elementary school education and began working as a contractor in Kerman’s Water Organization. Soleimani became familiar with reactionary ideas promoted by the mullahs in Iran back in 1976.

Soleimani joined the IRGC following the 1979 revolution and quickly became a senior official in the force. He was among the first IRGC members dispatched to the city of Mahabad in western Iran to quell protests. His actions were so vicious that he was quickly promoted as the IRGC Quds base commander in Kerman.

As the Iran-Iraq War began in 1980, Soliemani trained a number of IRGC battalions in Kerman and dispatched them to the front lines. He was later transferred as a company commander to Susangerd in southwest Iran. He was later promoted to commanding a brigade of the 41st Tharallah Division of Kerman. Through the course of the war, he escalated the ranks quickly and became commander of the 41st Tharallah Mechanized Infantry division.

Sources describe Soleimani as an individual lacking academic military knowledge who gained his experience in military tactics through on the ground experience. He was also known to make remarks claiming that the Iran-Iraq War was “one of the cheapest wars” and that Israel is in Iran’s missile range.

When the National Liberation Army of Iran launched its Operation Eternal Light in 1988 into Iran, Soleimani was among those who ordered his forces to the front lines. Following the decision by Iranian regime founder Ruhollah Khomeini to succumb to the Iran-Iraq War ceasefire in 1988, Soleimani and his forces returned to Kerman. He was later involved in the crackdown of protests in Iran’s eastern provinces and went on to be promoted as a senior IRGC official in southeast Iran.

Following the Iran-Iraq War ceasefire, the IRGC began smuggling narcotics to provide for expenses. Before being appointed as the IRGC Quds Force chief in 1997, Soleimani was in charge of narcotics production and distribution from Afghanistan to countries of the Middle East, Africa, Europe, and the U.S.

In early 1997, Ahmad Vahidi, then head of the regime’s Quds Force, resigned from his post and Iranian regime Supreme Leader Ali Khamenei appointed Soleimani in his post. From that point forward, Soleimani became fully in charge of the regime’s terrorist attacks, recruitment and exporting fundamentalism through the Quds Force into neighboring countries, the Middle East and other countries in Asia, Africa, Europe, and the U.S.

Soleimani was also Khamenei’s advisor in regard to some of these countries, including Afghanistan and Iraq. He also had the last word in the regime’s Supreme National Security Council on Iran’s meddling in Afghanistan and Iraq. Soleimani was personally leading the efforts to escalate the regime’s political influence and terrorist activities in Lebanon, Syria, and Palestine. In 2010 Soleimani was promoted to the rank of General and twice received medals from Khamenei himself.

“Today… our borders go far beyond and we need to be witnessing victories in Egypt, Iraq, Lebanon, and Syria; these are the impacts of the Islamic revolution,” Soleimani said in a speech in June 2011, using terms reminiscent of Khomeini himself.

Soleimani specifically supervised attacks against the Iranian opposition People’s Mojahedin Organization of Iran (PMOI/MEK) during the years of their stay in Iraq. These ruthless attacks, many against defenseless and unarmed MEK members, were carried out by Soleimani proxy groups.

Soleimani, one of the most vicious criminals of #Iran’s history, was involved in the massacre of hundreds of thousands of people in the region & in driving millions of others from their homes. He was also the mastermind of the massacre of the PMOI in Camp Ashraf, Iraq.#IRGC_Out

These same groups have also been heavily involved in the killing of Iraqi protesters and demonstrators especially throughout the past few months Iraq, and silencing any and all voices of dissent against the Tehran-backed governments in Iraq from 2003 onward.

Through the Lebanese Hezbollah, Soleimani has also wreaked havoc in Lebanon for decades and ordered Hezbollah to provide training for other forces, such as the Houthis down in Yemen.

More recently, Soleimani had been constantly traveling between Lebanon, Iraq, and Iran, especially with uprisings springing up in all three countries shaking the very pillars of the regime. The elimination of Soleimani is a major development significantly weakening the mullahs’ regime at a time when Tehran cannot afford more crises to juggle. This will lower the morale of the mullahs’ forces and their proxies across the region, placing the regime in a very complicated predicament with the future becoming darker like never before.