Iraq, January 25, 2020—After a few days of widespread advertisements, the Iranian regime and its proxies in Iraq held a rally in Baghdad on Friday in hopes of regaining their fast waning influence in Iraq. But like other maneuvers the regime has resorted to in the past months, what resulted was utter defeat and disappointment for the mullahs ruling Iran.

Tehran’s goal from the demonstration, which took place three weeks after its top terrorist Qasem Soleimani was killed in a drone raid in Baghdad, was to rally its troops in Iraq and occupy the Tahrir square, where nationwide protests have been raging for several months. The Iranian regime had banked on Muqtada al-Sadr to carry out this plot.

Karbala, #Iraq
Demonstrators tearing apart an image of Iranian regime Supreme Leader Ali Khamenei in an expression of their protests to #Iran‘s meddling in their country. 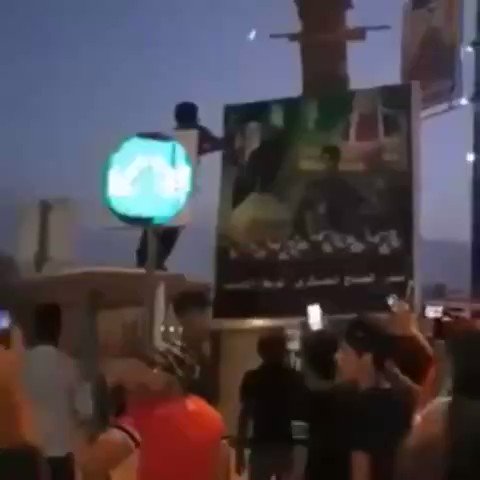 The mullahs wanted to thus derail the Iraqi uprising, whose goal is to end corruption and the meddling of the Iranian regime in their country. Prior to this, the regime tried to carry out another plot and divert attention from the demands of the Iraqi people by attacking the U.S. embassy in Baghdad and turning it into the focal point of the protests. The goal was to replace the calls for the eviction of the Iranian regime to demands for the removal of U.S. troops from Iraqi soil. But that plot ended in the regime losing Soleimani, its key player in the region.

What did Iran’s regime lose in Friday’s rally?

This time around, the regime tried to use Muqtada al-Sadr, a well-known agent of Tehran, and introduce him as a patriotic and nationalist Iraqi figure. But in effect, what resulted was that al-Sadr lost what little integrity and credibility he had. Al-Sadr ostensibly called for a demonstration against corruption and U.S. occupation. But Iraqi protesters challenged al-Sadr and reminded him that the call for independence should not be sent from Qom, Iran, and if al-Sadr really cares for the interests of the Iraqi people, he should make his call from al-Tahrir Square in Baghdad, where the loudest slogans are for the eviction of the Iranian regime from Iraq. 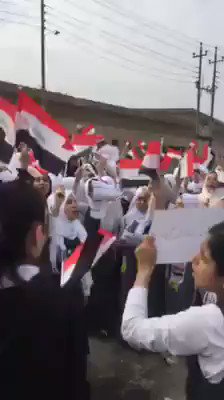 The organizers of the Iraqi uprising stressed that if the U.S. occupation of Iraq is the “fever,” then the Iranian regime’s meddling is a “cancer.” The regime’s plot was foiled even before the Friday rally took place, after al-Sadr backed down from holding his rally at the Tahrir Square and relocated the venue of the event to a location several kilometers away from the iconic plaza that symbolizes the Iraqi people’s struggle for freedom.

The event itself was very much reminiscent of the pro-regime rallies held inside Iran. According to news agencies, demonstrators were bussed from various cities to the location of the rally at the expense of the government. “Participants were recruited, transported by buses provided by the organizers and given signs, flags and sometimes food,” The New York Times wrote in its coverage.

The structure of the crowd also showed that most of the participant were members of the Hashd al-Sha’abi, the Iran-backed militia coalition that is responsible for numerous crimes against the Iraqi people. This is in contrast to the crowd that has been gathering in other hotbeds of the Iraqi uprising, where people of all segments of the Iraqi society and all walks of life gather to express their will for freedom and their desire to rid their country of the Iranian regime’s meddling.

Another serious setback for the regime was its failure to gain the backing of Ayatollah Ali al-Sistani, the spiritual leader of Iraqi Shiites. In his Friday prayer sermon, Sistani criticized politicians for not assembling the new government. Analysts interpreted Sistani’s remarks as the tacit backing for the demands of Iraqi protesters in al-Tahrir Square and rejection of al-Sadr’s move.

Quite embarrassing for the regime was that its backers tired after a few hours and returned to their homes. Meanwhile, the true Iraqi protests have been ongoing for more than four months, with demonstrators bearing the hot and cold weather and resisting daily attacks by the proxies of the Iranian regime. Despite more than 600 killed and 25,000 injured, the protesters continue to persist on their demands and return to streets day in, day out.

After the regime’s rally ended, Iraqi protesters were chanting, “No to Muqtada, No to Hadi [al-Ameri, Iran-backed militia leader], freedom for my country.”

The implications of the regime’s latest defeat

Friday’s rally was another strategic mistake for the Iranian regime. Tehran proved once again that aside from its agents and paid hands, it has no support in Iraq. Especially after Soleimani’s death, the regime’s is losing its power and clout in Iran’s western neighbor. This show of weakness only strengthens the resolve of the Iraqi people to rid their country of the mullahs’ evil once and for all. Clearly, the regime will not relent in its plotting and crimes in Iraq, but today, its eviction from this country is within reach more than ever.

Iraqi President: Vital to keep up pressure on fighting terrorists, and Security flaws should be addressed

Khamenei’s Friday Prayer remarks fail to save his sinking ship