Iran, March 10, 2020—The coronavirus crisis is spreading across Iran in such catastrophic proportions that even the regime’s own officials are voicing serious concerns. According to information obtained by the People’s Mojahedin Organization of Iran (PMOI/MEK), the death toll of the COVID-19 outbreak in Iran has reached 3,000.

“The towns of Rudsar and Amolesh [northern Iran] each have one hospital and they are reporting dire conditions. Equipment and supplies are very low. They are running out of first aid and emergency supplies,” said Assadollah Abbasi, a member of the regime’s Majlis (parliament). “… the hospital in Amolesh has no visiting physician and both hospitals are always facing shortages in doctors, nurses and staff in general… the hospital in Rudsar where coronavirus patients are held has no oxygen generator/concentrator or CAT scan devices. This hospital is now full and cannot accept new patients. Gloves and masks are donated by ordinary people,” he added.

Bahram Parsaei, another Majlis member, made startling remarks about the COVID-19 epidemic. “If Fars Province is not quarantined it will become the next Gilan Province,” he said. Fars Province is located in south-central Iran and Parsaei is referring to Gilan Province in northern Iran where over 400 people have already died and is considered a major coronavirus epicenter in Iran.

More than 2,600 people across 127 cities of 30 provinces in Iran have died of the coronavirus, according to Iranian opposition PMOI/MEK.

MP: Climax is in the next two weeks
Regime insider: More than 2,000 have died
Official stats: 237 dead#Iran#COVID2019 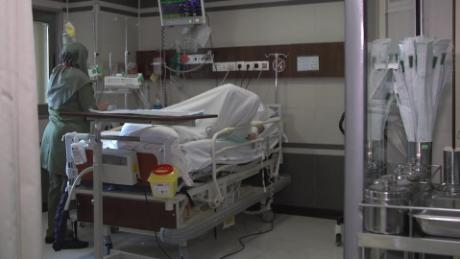 119 people are talking about this

Over 3,000 people in 139 cities of 31 provinces across Iran have died of coronavirus, according to the Iranian opposition People’s Mojahedin Organization of Iran (PMOI/MEK).

The mullahs’ regime is reluctantly declaring, albeit belatedly, state of emergency in more provinces and cities.

People’s Mojahedin Organization of Iran (PMOI/MEK)@Mojahedineng
More than 3,000 people across 131 cities of 31 provinces in Iran have died of the coronavirus, according to Iranian opposition PMOI/MEK.

87 people are talking about this

Majlis (Parliament) Deputy Tayebeh Siavoshi made damning remarks regarding the COVID-19 outbreak in Iran. “(Hassan) Rouhani has not yet accepted that the situation is very critical … Action should have been taken in February, but they were cynical (about the virus outbreak) and said that talking about Coronavirus was intended to disrupt the election!” she said.

“We are at the peak of the outbreak and the number of those infected is increasing by the day … Referrals to the hospitals are very high,” said a member of Tehran’s committee to combat the coronavirus. No beds are available in hospitals across the country. Hospitals in Kashan are full of patients and no beds are available, forcing the transfer of patients to Tehran. Those who need testing are several times more than those we have been tested. We have stopped sending more people for tests… By the first week of April or early May, we estimate that 40 percent of the population will be infected. We have no personal protective equipment in the hospital for the hospital staff …,” the official added.

“There is still a shortage of coronavirus protective equipment such as masks, gloves, gowns and protective shields in some medical centers; nurses and medical staff are working in difficult conditions to treat and provide care for the patients,” the official news agency reported.

Much of the country’s wealth is in the hands of the Revolutionary Guards (IRGC), and the Office of Supreme Leader Ali Khamenei. Yesterday, four Majlis deputies requested measures to allocate resources of “Headquarters for Executing the Order of the Imam” (managed by Khamenei’s office),  “The Mostazafan (Abased) Foundation” (the largest holding company in the Middle East), and “Petrochemical Holdings” to the campaign combatting coronavirus.

Reports from Kashan in central Iran are also indicating drastic conditions. “Let me be frank. We have had 88 coronavirus deaths in the two towns of Kashan and Aranbidgol,” said Ali Akbar Mortazaie Ghahroudi.

March 9 – Citizen report from Babol, northern Iran: “No hospital is willing to accept our father. They said 90 people are in line. Take him home… No one is allowed inside the infected patients’ section in the Rouhani Hospital of Babol. The staff receive the patient, tell you to leave a phone number and go wait in the reception area… There are many corpses piled up and placed here and there. Family members are not allowed inside to receive the corpses. They are forced to wait outside the hospital… They don’t even provide a bowl of soup for the patients… we were finally able to get a bed for our patient but they told us to bring sheets, pillows and blankets…”

Keyhan daily, the known mouthpiece of Iranian regime Supreme Leader Ali Khamenei, published a piece expressing the regime’s major concerns over increasing revelations made by the Iranian opposition People’s Mojahedin Organization of Iran (PMOI/MEK) on various subjects, including the coronaviruis.

“The (MEK) in Albania are taking advantage of a war against us. A large number of accounts, pages, channels… are involved in publishing fake posts…,” the piece reads in part. “… social media inside the country has become a second world for the people. Unfortunately, since this environment is being managed by enemies of our state, they are constantly carrying out measures aimed at influencing the population.”

The undeclared figures in Iran’s 2022 budget

The mullahs are the main cause of poverty in Iran