Iran, March 17, 2020—Despite broad efforts by the regime to prevent celebrations during the annual Fire Festival (Charshanbe Suri), marking the eve of the final Wednesday of the Persian calendar year, Iranian resistance units and defiant youths took to the streets and reiterated the Iranian people’s desire to overthrow the tyrannical regime of the mullahs.

The regime had used the coronavirus outbreak as a pretext to increase security presence across cities. Iranian officials are well aware that their mishandling of the COVID-19 situation, which has so far resulted in the death of more than 5,500 innocent people across Iran, has caused widespread outrage among the Iranian population, and they fear the re-emergence of popular protests such as what happened in November 2019 and January 2020.

The People’s Mojahedin Organization of Iran (PMOI/MEK) had called for the people to defy the regime’s repressive measures and to turn the Fire Festival into uprisings and protests against the regime.

As of Monday afternoon, March 16, over 5,500 people have died of the coronavirus in 186 cities across all of Iran’s 31 provinces, according to the Iranian opposition People’s Mojahedin Organization of Iran (PMOI/MEK).#Iran#COVID2019 https://english.mojahedin.org/i/iran-coronavirus-outbreak-news-20200316 …

Reporting by PMOI/MEK Iran, March 16, 2020—Political infighting among the mullahs ruling Iran is escalating parallel to the coronavirus epidemic in Iran. Both these phenomena are very dangerous for…

79 people are talking about this

The people of Kermanshah celebrated the Fire Festival to the dismay of the mullahs, who tried their best to intimidate people and prevent any social movement on this national festivity. One citizen said, “The regime has brought up the excuse that nurses and medical staff are tired, so the people shouldn’t celebrate the Fire Festival. It’s true, the nurses, and all the people are tired, and more than the coronavirus outbreak, they’re tired of the inefficient officials who are running the country. In this celebration, we will burn the coronavirus of the mullahs.”

New videos obtained from inside Iran show people celebrating the Fire Festival in more cities, including Shahriar (Karaj), Shahr Ara (Tehran), Sahrud and Delijan (Markazi province). A citizen reporting from Shar Ara said that the people were celebrating the national festivity while also taking medical precautions, proving that the regime’s only concern is protests.

In Shahrud, the people are celebrating in the streets despite the heavy presence of security forces.

In Karaj, the youth were chanting, “We answer fire with fire, Khamenei burn,” a reference to the regime’s crimes in killing more than 1,500 protesters during the November 2019 uprisings. In Fardis, Karaj, bonfires could be seen and sounds of firecrackers filled the streets.

Iranian opposition President Maryam Rajavi, head of the National Council of Resistance of Iran (NCRI), sent a message of support to the Iranian people on this occasion of national festivities.

“Tonight marks a crimson and blazing Feast of Fire for the people of Iran who are grieving in pain, and who are furious and rebellious. Iran’s brave youth and heroic Resistance Units will set fire to the regime’s figures as they did in the fiery uprising of November 2019. Iran is furious. Let the world see and hear that the people of Iran want neither the coronavirus nor the mullahs,” Madam Rajavi said. “Set up your popular resistance councils as quickly as possible. The people of Iran say the spirit of life is in our hands and we will rise up again, a thousand times more, and the great spring will arrive after this cold and bleak winter,” the NCRI President added.

Tonight marks a crimson and blazing Feast of Fire for the people of #Iran who are grieving in pain, and who are furious and rebellious. Iran’s brave youth and heroic Resistance Units will set fire to the regime’s figures as they did in the fiery uprising of November 2019 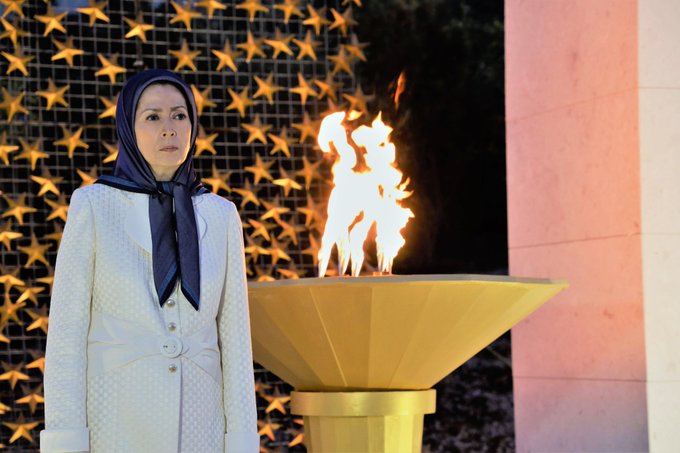 320 people are talking about this

“We’re saying no to the mullahs’ regime. Happy Fire Festival!” a group of revelers in Ardebil said as they filmed their bonfire.

A local from the city of Abhar, northwest Iran, said, “The people are celebrating the Fire Festival despite the heavy rain. The streets are filled with the sounds of firecrackers.”

A reporter from Shiraz said security forces are forcing merchants to close their shops.

But the Iranian Resistance Units, a network of MEK activists, torched photos of regime supreme leader Ali Khamenei and regime founder Ruhollah Khomeini. “Khamenei, you’re the virus,” one resistance unit member from Kermanshah said as he set fire to the picture of Khamenei.

“40 years of crimes, death to the mullahs’ regime,” members of another resistance unit in Tehran chanted as they torched effigies of regime leaders. “Death to Khamenei, hail to Rajavi,” referring to Iranian Resistance leader Massoud Rajavi and opposition President Maryam Rajavi, head of the National Council of Resistance of Iran (NCRI).

In Kerman, one of the Resistance Unit members said, “Khamenei, you wanted to stifle the voice of the people. But we will fight with the real coronavirus of the mullahs until the end. As Massoud Rajavi said, this will be the year your regime is overthrown.”

Resistance Units in Mashhad held handwritten signs that exposed the regime’s crimes in the spread of coronavirus. “Khamenei, why didn’t you quarantine Qom?” one sign read, referring to the city in central Iran where the coronavirus outbreak began. “The coronavirus of the mullahs is the cause of the people’s death,” another sign read.

Youth in the Balu district of Urmia, a city in northwest Iran, began their celebrations with numerous heavy explosions that rocked the entire area. Security forces are very concerned about the situation escalating out of control and evolving into anti-regime protests.

UN Headquarters in Afghanistan attacked by the Taliban