Iran, May 12, 2020—The state-run Mostaghel daily in Iran published a piece on May 11 titled, “Tehran will one day be destroyed!” warning about the consequences of a massive earthquake hitting the Iranian capital.

“Tehran will one day be destroyed. The title of this piece is not meant to be a catchy line, but in fact mirror the remarks of Professor Bahram Akashe, the most renowned earthquake expert in Iran. Specialists in this field all agree that a 7-magnitude earthquake in Tehran would logically leave behind around five million dead. This evaluation has been conducted considering the fact that Iran, and indeed the capital Tehran, are experiencing a number of low-magnitude earthquakes on a daily basis recently. Any of these lesser powerful quakes can in fact lead to a massive earthquake similar to that of Lisbon.”

The Lisbon earthquake, also known as the Great Lisbon earthquake, occurred in Portugal on the morning of Saturday, November 1, 1755, at around 9:40 local time. In combination with subsequent fires and a tsunami, the earthquake almost totally destroyed the city of Lisbon and adjoining areas. Seismologists today estimate the Lisbon earthquake had a magnitude in the range 8.5–9.0, with its epicenter in the Atlantic Ocean about 200 km (120 mi) west-southwest of Cape St. Vincent.

Chronologically it was the third known large scale earthquake to hit the city (one in 1321 and another in 1531). Estimates place the death toll in Lisbon alone between 10,000 and 100,000 people, making it one of the deadliest earthquakes in history.

“In contrast to various voices calling for a decrease in Tehran’s population, the policies adopted have resulted in an increasing number of people flocking to the city, making the Iranian capital one of the most dangerous cities in the world to live in,” the Mostaghel piece adds. “The recent earthquake was a warning for policymakers to know that the current circumstances are quite dangerous. We must do something prior to the destruction of Tehran. The recent quakes are a sign of fire under the ashes. If this flame erupts, it will engulf the lives of millions.”

An earthquake near Iran’s tallest mountain killed at least one person and jolted the capital Tehran early on Friday, May 8, forcing panicked locals to flee buildings. The shallow 4.6-magnitude quake hit at 12:48 am local time near the city of Damavand, about 55 kilometers east of Tehran, according to the US Geological Survey. 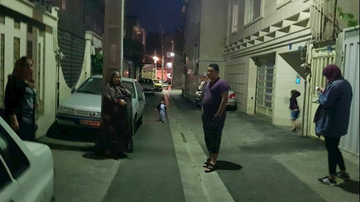 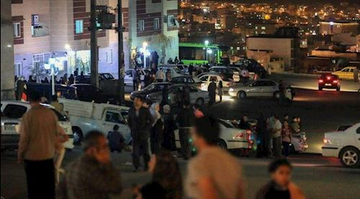 The quake prompted scores of residents of the capital to leave buildings for the safety of streets and parks. Two died and more than 20 were injured. The quake was preceded by a 2.9 tremor more than an hour earlier and was felt in the northern provinces of Mazandaran, Qazvin, Zanjan, and Alborz.

Iran sits on top of major tectonic plates and experiences frequent seismic activity. A 5.7-magnitude earthquake that rattled the western village of Habash-e Olya on February 23 killed at least nine people over the border in Turkey.

In 2003, a 6.6-magnitude quake in south-eastern Iran destroyed the ancient mud-brick city of Bam and killed at least 70,000 people.

Iran’s deadliest was a 7.4-magnitude quake in 1990 that killed tens of thousands of people in northern Iran, injured at least 300,000 and left more than a million homeless.