Iran, November 19, 2019—Over 130 cities spread throughout Iran are witnessing continued protests in response to a gas price hike imposed by the mullahs’ regime on Friday, November 15. The Iranian people are intensifying their protests and specifically stating political demands by targeting senior regime officials and the entire mullahs’ apparatus. In their slogans, protesters are demanding the downfall of the Iranian regime and targeting Supreme Leader Ali Khamenei, President Hassan Rouhani and the Revolutionary Guards (IRGC) as the root of the Iranian people’s ongoing miseries.

Reports from the regime’s own news outlets indicate protests and the uprising continue, especially in the cities of Mahshahr, Karaj and Abadan. Protesters in Mahshahr launched bonfires and blocked roads on Monday night. Youths were also reported to be in clashes with the regime’s oppressive security forces in the restive city of Karaj. Protesters were also blocking roads in Abadan. It is worth noting that Mahshahr and Abadan are petrochemical and oil hubs, respectively. Karaj is located just west of the capital Tehran.

Netblocks.org is reporting the internet shutdown in Iran has continued for 75 hours.

Update: It has been 75 hours since #Iran introduced a near-total internet shutdown leaving Iranians isolated from the rest of the world 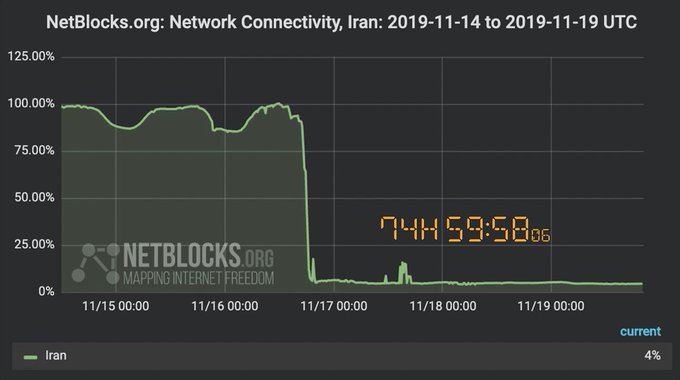 In Kermanshah, western Iran, protesters held demonstrations in Dowlatabad Boulevard and the Dieselabad district. Youths were also seen clashing with the regime’s oppressive security forces. Banks and administrative buildings were torched by the angry locals and the Kermanshah bazaar was closed down today. Three members of the state police were killed and a number of Revolutionary Guards (IRGC) Basij members were injured in these clashes.

In Nasim Shahr, located southwest of the Iranian capital Tehran, protesters torched the regime’s judiciary building and a police station located on the road leading to the city of Saveh. The regime’s security forces were seen fleeing this area.

In the city of Pakdasht near Tehran, brave protesters reportedly clashed with the regime’s oppressive forces. The city is becoming a war zone.

In the Tehranpars district of the country’s capital, protesters have teamed up in groups of seven or eight, launching demonstrations and clashes against the regime’s security forces.

In Kazerun, south-central Iran, protesters were seen torching a center belonging to the regime and beating a number of local mullahs. Eyewitness reports indicate authorities dispatched tanks to various scenes of unrest but were unable to disperse the crowd.

In Mahshahr, southwest Iran, six members of the IRGC Basij were killed by protesters.

“Cells of sedition were established on Saturday, November 15. The MEK have cells in our country and other countries, and they are striking blows to our interests,” said Basij chief Gholamreza Soleimani.

Reports indicate protests have expanded to 132 cities across Iran and the internet remains under a near total shutdown by the mullahs’ regime.

Update: 65 hours after #Iran implemented a near-total internet shutdown, some of the last remaining networks are now being cut and connectivity to the outside world has fallen further to 4% of normal levels  #Internet4Iran #IranProtests 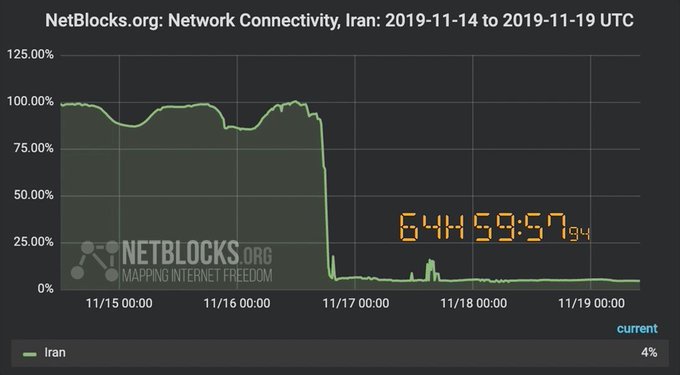 In Qaem Shahr, northern Iran, the youths launched bonfires in downtown areas on Monday and were seen chanting anti-regime slogans. Authorities dispatched anti-riot units in response in an attempt to scatter the crowd. Protesters were also seen torching a bank. Internet access in the regime’s own administrative offices is only provided for the most senior official. Ordinary employees do not have internet access. 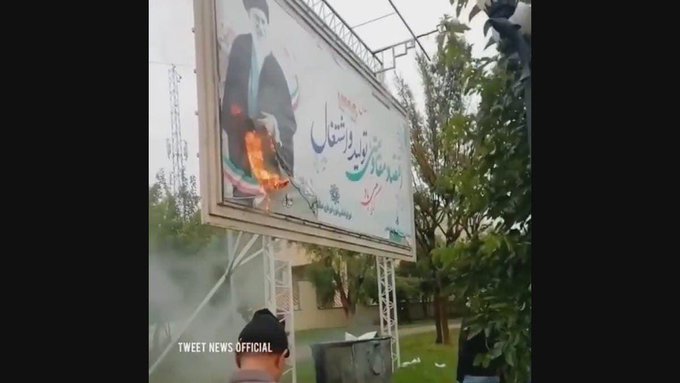 Reports from Yazdanshahr in Isfahan Province indicate a large number of protesters being killed and wounded in recent protests. Locals have torched three banks and the regime’s municipality building. On Monday night, Revolutionary Guards (IRGC) members stormed the city’s hospitals and transferring the dead bodies and injured protesters to unknown location(s).

Shiraz, south-central #Iran
Locals are in control of the city’s roads.#IranProtests 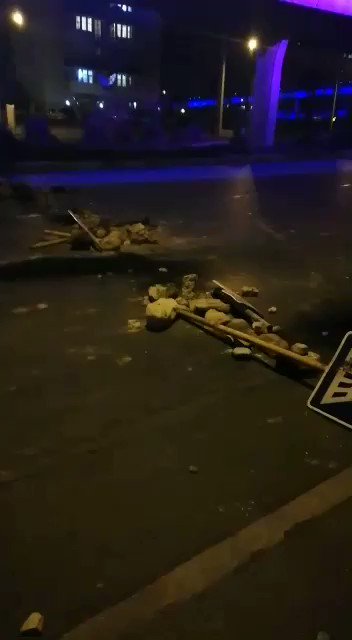 On Monday, many cities including Tehran, Shiraz, Isfahan, Karaj and Kermanshah were scenes of intense clashes between the people and the regime’s police, IRGC, Ministry of Intelligence and Security (MOIS), anti-riot units and plainclothes agents. In many scenes protesters were able to force the regime’s forces to withdraw from their positions, according to a statement issued by the Iranian opposition coalition National Council of Resistance of Iran (NCRI).

Students of Azad University in Karaj held a protest rally chanting, “Enough with promises! Our people are fed up!”

PMOI/MEK supporters in Washington, DC, held a rally in solidarity with the nationwide uprising in Iran.

Washington
PMOI/MEK supporters holding a rally in solidarity with protests in #Iran.#IranProtests 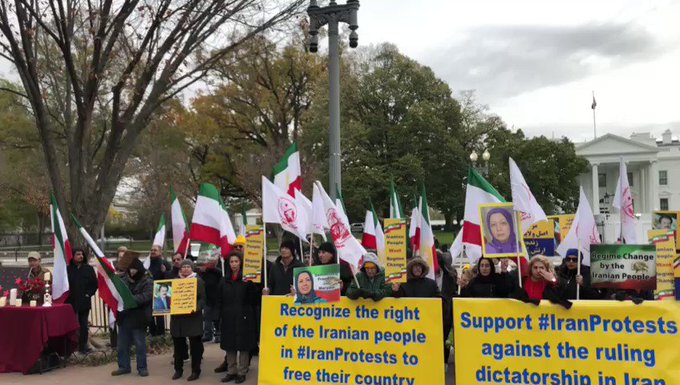 Freedom loving Iranians and MEK supporters in London also held a rally in solidarity with the nationwide uprising in Iran. 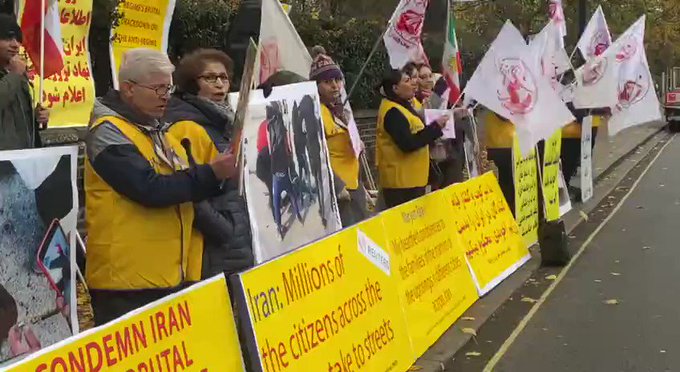 A similar rally was also held in Rome, Italy.

Shiraz, south-central #Iran
Protesters are gaining control over the city and the regime’s oppressive security forces have launched air patrols.#IranProtests

Reports from the city of Mehrshahr near Karaj indicate protesters storming the regime’s Commerce Chamber and torching the site on Monday night.

In the capital Tehran, protesters in the Tehranpars district were involved in heavy clashes with the mullahs’ security force on Monday night and took to graffiti afterwards. They wrote, “Down with Khamenei!” in a direct reference to the regime’s Supreme Leader Ali Khamenei. 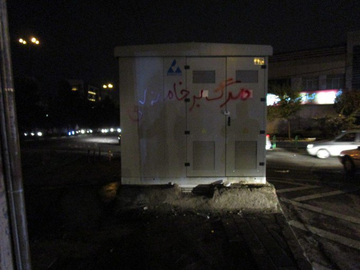 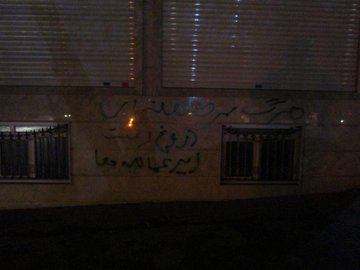 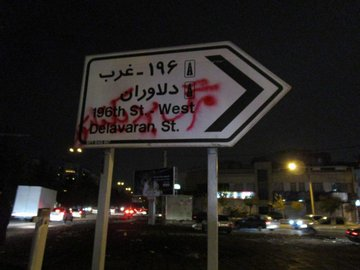 A report from Shiraz: “The city is under the protesters’ control. They have taken control over all administrative buildings. During the day, we block the roads and during the night protesters attack various banks, police stations and … Last night I was in the Adelabad district with a friend. The families of prisoners brought a bulldozer to bring down a prison wall and release the detainees. Members of the Revolutionary Guards (IRGC) opened fire in response. Seven or eight individuals were shot but I don’t know if anyone died… Police units are not taking any action. Many of the roads are controlled by the people and the city is in a lockdown… The mullahs are all terrified and not coming out… Shiraz will no longer be the same… the people have uprooted the mullahs in Shiraz.”

In Germany, PMOI/MEK supporters held a rally in Berlin in solidarity with the nationwide uprising in Iran against the mullahs’ regime.

Berlin, Germany
PMOI/MEK supporters holding a rally in solidarity with the nationwide uprising spreading across #Iran.#IranProtests 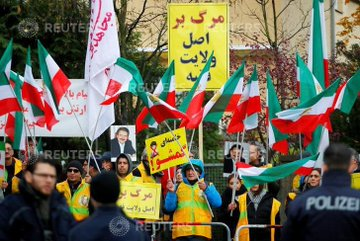 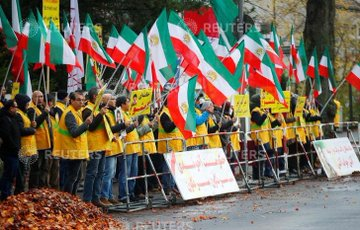 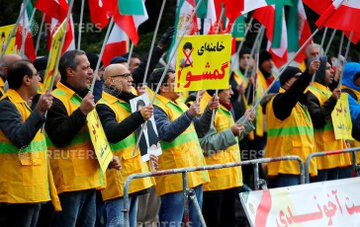 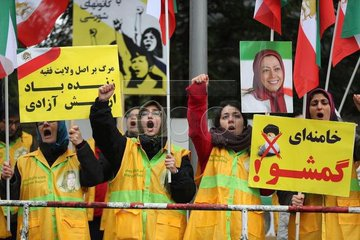