Iran, November 21, 2019—On Wednesday, Ali Khamenei, the supreme leader of the Iranian regime, futilely tried to claim victory over widespread protests that have shook Iran in the past week.

It’s easy for Khamenei to make such remarks. His regime continues to block internet across the country, preventing any news of protests that erupted over fuel prices to reach the world.

But Khamenei’s claim begs the question, if the regime has contained the unrests, why does it need to continue shutting off access to internet?

The answer can be found in what little information that is trickling from inside Iran. According to reports obtained by the network of the People’s Mojahedin Organization of Iran (PMOI/MEK), on Wednesday night, protests continued in various cities despite the regime’s brutal crackdown.

In Mashhad and Andimeshk, protesters set fire to several gas stations. In Isfahan, a bank was torched. In Kut-e Abdollah, protesters attacked a police station. Those are not the signs of a regime that is in control of the situation.

Furthermore, state-run newspapers and television continue to admit that protests continue across the country and the regime is faced with a serious security and survival problem. 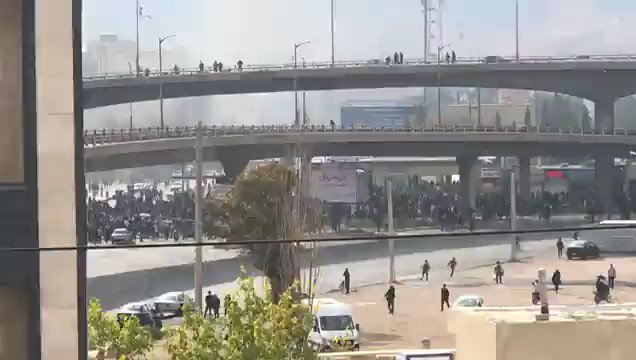 The regime’s own media are comparing the effect of the protests to that of an atomic bomb. One state-run newspaper wrote, “In the unrests that happened in Alborz province, eight police stations and three police booths were attacked. Also, during these incidents, three government facilities were destroyed and the windows of 43 banks were broken.”

On November 19, the Resalat newspaper admitted that the protests were aimed at the regime in its entirety and its corrupt rulers. Resalat wrote, “The current riots are against the nobility. The protesters are the poor, not the middle class and the rich.”

All of these remarks as well asreports that the PMOI/MEK has managed to obtain indicate that the protests continue to this day. The reigme’s continued blockade on internet access in Iran only proves that it is trying to prevent news of the protests from reaching the world and have a free hand to slaughter the people. Even after the regime relaxed the blackout, Iran’s internet connectivity remains a fraction of its full capacity.

Furthermore, Khamenei himself admitted that regardless of how effective his regime’s security apparatus has been in quelling the protests, his regime has not been able to solve the fundamental economic problems that led to the eruption of these protests in the first place. “The sanctions have intensified. Any hopes that these sanctions will subside in the next year or two is ill-founded. These sanctions are here to stay,” he said.

Khamenei has been faced with budget deficits since the U.S. reimposed sanctions on his regime. One of his options was cut back on his illicit activities such as warmongering in the region and building ballistic missiles. This would allow him to gather more than enough funds to support the country’s economy. Had he also been thinking about the people’s problems, he would have clamped down on rampant government corruption, which is taking its toll on the people’s lives (though that would be a far-fetched dream, since Khamenei himself is one of the main beneficiaries of the regime’s financial corruption).

But instead, he chose to solve the deficit out of the people’s pockets by raising tariffs on fuel. The backlash he is now facing in the streets of more than 140 cities proves his strategic mistake. And his only response so far has been to brutally suppress the people.

On the other hand, the Iranian people, who no longer have anything to lose under the corrupt rule of the mullahs, are determined to continue their protests and fight for their most basic rights. And the continued internet blackout only proves that Iran’s 2019 protests continue in full force.