Iran, November 25, 2019—Demonstrations, protests and a nationwide uprising have spread to numerous cities, towns and villages throughout, growing into its eleventh consecutive day on Monday, November 25. In Tehran and many other cities authorities are implementing martial law following unprecedented unrests and protests as the Iranian people have risen in at least 171 cities checkered across the country.

The network associated directly to the Iranian opposition PMOI/MEK inside the country confirms that at least 300 people are killed by regime authorities, along with over 4,000 people injured. Reports also show more 10,000 protesters have been arrested. The actual statistics could unfortunately be far higher. NetBlocks is reporting a gradual and calculated return of internet access in Iran.

Protesters are specifically raising political demands directly protesting the mullahs’ rule by strongly criticizing senior regime officials and the entire mullahs’ apparatus. In their slogans, protesters are demanding the toppling of the Iranian regime and placing their crosshairs on the Supreme Leader Ali Khamenei, President Hassan Rouhani and the Revolutionary Guards (IRGC) as the root of the Iranian people’s ongoing miseries.

As global condemnations escalate and the world is learning more about the scope of the mullahs’ atrocities, IRGC deputy chief Ali Fadavi is now resorting to new lies regarding the Iranian people’s uprising. “The rioters were using small pistols to shoot many people in the abdomen area at point-blank range. They were killing people,” he claimed. Of course, newly obtained footage from inside Iran clearly show how the mullahs’ security forces target the Iranian people in the most ruthless manner.

This video from November 16 shows security forces attacking protesters in the city of Gorgan, northern Iran, shooting at point blank range and even attacking him with what appears to be an ax. Unfortunately, this young man lost his life on the night of this incident. 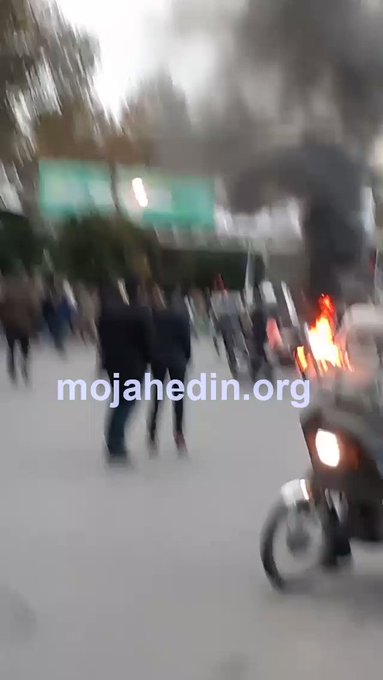 On Sunday, November 24, supporters of the Iranian Resistance and the PMOI/MEK in the United Kingdom held a rally outside the mullahs’ embassy in London, voicing their solidarity with the national uprising in Iran and condemning the ruthless crackdown.

Ali Shamkhani, Secretary of the Iranian regime’s Supreme National Security Council, further indicated what entity the mullahs believe was behind the recent uprising in Iran. “I think 34 individuals of the (PMOI/MEK) have been arrested up to now and a vast network of others who were active not under the banner of the (PMOI) but with their train of thought and measures have been identified… These protests are considered a reflection of the truth,” he said.

Mohammad Reza Sabaghian, a former Majlis (parliament) member, also voiced concerns about the fate of the mullahs’ regime. “There is no doubt that during these protests the enemies intended to deliver a blow to the state. We should not claim everything is back to normal,” he warned.

Ali Fadavi, deputy chief of the Revolutionary Guards (IRGC), also voiced alarming remarks. “This was a massive conspiracy. We are aware of the scope of this initiative. We have information that the conspiracy was a large blueprint.”

Safar Harandi, a member of the regime’s Expediency Council, said: “The rioters appeared in organized groups and carried out similar measures across the country… The rioters had a central command outside of the country and a united mentality.

In Zanjan, northwest Iran, the people held a demonstration on Sunday night and chanted, “No fear! We’re all together!”

A report from Karaj, west of Tehran, to the MEK network sheds more light on the brutality practiced by the regime’s forces during the recent crackdown. “Authorities opened immense fire in the Mehrshahr district of Karaj. A 17-year old girl was shot in the head and died. Nearly 15 other were wounded. I don’t know how many were killed. Authorities pressured this girl’s family to remain silent… [Authorities] first shot plastic bullets. Then they started using pellets. Realizing they could not control the crowd, they dispatched a helicopter to this district, and then they started attacking and using live ammunition. A number of people were shot and wounded right before my eyes. Unfortunately, I couldn’t take any footage because I was busy helping the wounded… All the banks in the Mehrshahr district of Karaj have been torched. Most of the banks in the Golshahr district are also destroyed.”

Reports from Shiraz, central Iran, indicate an IRGC colonel was severely beaten in the recent unrest, indicating the scope of the clashes when protesters are able to reach such a high-ranking IRGC officer on the ground.

IRGC chief Hossein Salami warned his troops about the regime being engulfed in an all-out war. “Believe me we are in a major world war. Believe me the war that has begun these days in the streets is a complete global scenario,” he said. It is quite telling how this senior Iranian regime official explains how this uprising has only just begun.

Ali Balali, advisor to the IRGC Aerospace Force commander emphasized on the importance of the decision to impose a nationwide internet clampdown. “If the internet was not shut down riots would have engulfed the country. Up to now we had not thought about launching a national internet. We saw what happened to us in the recent [uprising],” he said.

Ruydad 24, a state-run website, also published a piece on this sensitive subject. Head of the Armed Forces Judicial Organization named the town of Sadra (near Shiraz, central Iran) as an example where only one bank has been left intact (at least seven banks were destroyed in this town) … It appears that a helicopter was dispatched to the town of Sadra with a mission to prevent people from taking control over a local IRGC Basij site… Khamenei’s representative in Sadra says unfortunately rioters attacked his office in this town on Saturday night (November 16) and torched the site… This office was burning until Sunday morning and all the equipment inside were destroyed.”

This further indicates how protesters specifically targeted icons representing the mullahs’ regime in their expressions of anger and protests.