Iran December 3, 2019—The mullahs’ regime ruling Iran carried out a vicious killing spree against demonstrators in the city of Mahshahr in southwest Iran during the November uprising, according to numerous reports. The New York Times cited eyewitness reports and wrote in Mahshahr alone witnesses and emergency officials saying 40 to 100 civilians were killed by the Revolutionary Guards (IRGC), many of them being youths.

In a desperate attempt to whitewash and justify their horrendous crimes, the regime’s state TV aired a report describing the situation in Mahshahr as “different” from other areas, accusing the protesters of being “armed” and “members of separatist groups using firearms, and even heavy machine guns to close down roads leading to the port of Mahshahr. The report also claimed the “rioters” intended to bomb the local petrochemical sites and launching “armed warfare” that prompted security and military forces to “take action and save the lives of local residents.”

Update on #IranProtests
Number of protesters killed: at least 750
Injuries: at least 4,000
Arrested: at least 12,000
Numbers are rising

Names of 28 More Martyrs of the Iranian People’s Nationwide Uprising Released by MEK#Iranhttps://www.ncr-iran.org/en/ncri-statements/iran-protests/27002-names-of-28-more-martyrs-of-the-iranian-people-s-nationwide-uprising-released …

National Council of Resistance of Iran latest statements about Iranian protests and demonstrations.

Mahshahr police chief Reza Papi claimed members of dissident groups sought refuge in the marshes and from there opened fire on his units. Mahshahr Governor Mohsen Biranvand said in a state TV interview that the main imports from the port of Mahshahr were being threatened and considering the fact that only 400 trucks are delivering goods into the country each day from this port, it was vital for security forces to take urgent action.

It is worth noting that during the November uprising the mullahs’ regime shut down the internet and reports of this killing spree are only being provided to the outside world as the internet is back online at a very slow pace in Iran.

The following is an exclusive report provided by Mahshahr residents:

“The IRGC units stationed in Khuzestan Province dispatched a commando brigade to Mahshahr under orders from the Khuzestan governor after locals blocked a road leading to nearby petrochemical sites. The units were equipped with tanks, armored personnel carriers, a variety of heavy and semi-heavy weaponry, and even military gunships. These units first entered the Chamran (Jarahi) district and began opening fire on the people using AK-47s and .50 caliber heavy machine guns. They were also opening fire on civilians from helicopters. They were even targeting those in their homes who had not participated in the protests. Around 17 individuals, including two 4 and 8-year-old children, and even an old woman above the age of 70, were killed from direct IRGC fire. (The exact number of those killed remains uncertain due to the fact that the youth were seen fleeing to the marshes and the IRGC opened fire blindly into the wetlands.)

On Monday, December 2, a civilian from Mahshahr said: “I’m from this city and you know that in the recent protests we had the highest number of protesters killed after Kermanshah (western Iran). With over 20 petrochemical sites, Mahshahr is one of the largest petrochemical hubs in Iran and even in the Middle East. Port Khomeini is also located here which is one of Iran’s largest trading ports. It is also one of the country’s largest oil exporting ports (most of Iran’s oil and the Abadan oil refineries’ production are exported through Mahshahr and Khark). More interesting is the fact that Mahshahr is located between the two rivers of Zohreh and Jarahi. As a result, it has a very special agricultural and fishing stature among other cities of Khuzestan Province.

Mahshahr, southwest #Iran
Footage of the mullahs’ vicious killing spree in this city.
Voice heard saying, “Viva the youth of Jarahi,” referring to a district in Mahshahr. Reports indicate the IRGC killed 40 to 100 locals, and possibly more.#IranProtests 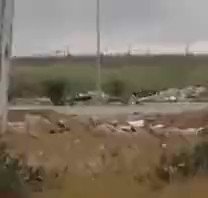 “The largest storage tanks and export sites of gasoline, diesel fuel, other oil products and different goods are near Mahshahr. While this city is the second largest in Khuzestan Province after Ahvaz, the locals of Mahshahr are living in utter poverty. Unemployment and poverty are rampant in many areas of Mahshahr.

“The IRGC even ordered the city hospital to refuse medical care to those injured in these clashes. The IRGC units entered three other districts on that same day where they continued their killing sprees. Clashes continued in the Taleghani district where locals are armed. They defended themselves and heavy gunfire continued non-stop from 6 pm Tuesday (November 19) to 1 am Wednesday (November 20). They entered the area with tanks, yet the locals defended their homes. The IRGC also suffered many casualties. Local sheikhs and elders mediated, resulting in an end to the clashes and the Taleghani district was surrounded. For three days the IRGC and other security forces were arresting youths in these areas. Clashes have stopped but the situation remains tense.”

How the Iranian regime is failing the economy