Iran, March 14, 2020—More than 4,000 people in Iran had lost their lives to the novel coronavirus, according to reports obtained by the People’s Mojahedin Organization of Iran (PMOI/MEK) on Friday night. The figure officially declared by the government is 514, a number that is disputed even by the regime’s own officials.

As the virus continues to spread across country and claim more lives, Iranian officials are trying to cover up their failed attempts to prevent the spread of the virus. The regime also knows that its mishandling of the situation has caused public outrage and is preparing to counter potential protests.

More than 4,500 people across 175 cities in all of Iran’s 31 provinces have died of the coronavirus, according to the Iranian opposition People’s Mojahedin Organization of Iran (PMOI/MEK). This tally is a round-up of reports collected as of Saturday afternoon local time (March 14).

The number of victims in various provinces include:

More than 4,500 people across 175 cities in Iran are dead of coronavirus, per Iranian opposition PMOI/MEK.

Numerous other reports indicate that physicians, nurses and medical staff across the country are in dire conditions. Many are deprived of protected suits and basic necessities. The number of medical staffs losing their lives is constantly on the rise, especially in the provinces of Gilan and Mazandaran. The aid sent to Iran by the World Health Organization and various countries are being transferred to Revolutionary Guards (IRGC) warehouses and hospitals. Some are even sold at skyrocketing prices on the black market.

Iranian opposition President Maryam Rajavi, head of the National Council of Resistance of Iran (NCRI), called on WHO to supervise the status quo of Iran’s medical staff and present a report to the United Nations Secretary-General and Security Council.

Madam Rajavi also said refusing to release Iran’s inmates in these circumstances, especially political prisoners, is considered a grave crime against humanity. Regime Supreme Leader Ali Khamenei and other senior officials will be held responsible in this regard, she added. NCRI President Maryam Rajavi called on the UN Secretary-General, High Commissioner for Human Rights and the Human Rights Council, along with the European Union and Member States, to take urgent action to save the lives of Iran’s prisoners, emphasizing that intervention by the international community to prevent a humanitarian catastrophe is now more imperative than ever before.

Due to inhuman conditions in the regime’s jails in #Iran, prisoners and particularly the political prisoners must be released immediately, unconditionally and without asking for bail, otherwise all prisoners would die of the #Coronavirus.

Iranian opposition President Maryam Rajavi, head of the National Council of Resistance of Iran (NCRI), issued a message to the Iranian people regarding the ongoing coronavirus pandemic. “I urge you to strengthen our national solidarity to prevent further spread of the infection, to protect the lives of our compatriots, and to protest and confront the detested ruling regime,” Madam Rajavi said.

I urge you to strengthen our national solidarity to prevent further spread of the infection, to protect the lives of our compatriots, and to protest and confront the detested ruling regime #Covid_19 #CoronaOutbreak #Iran 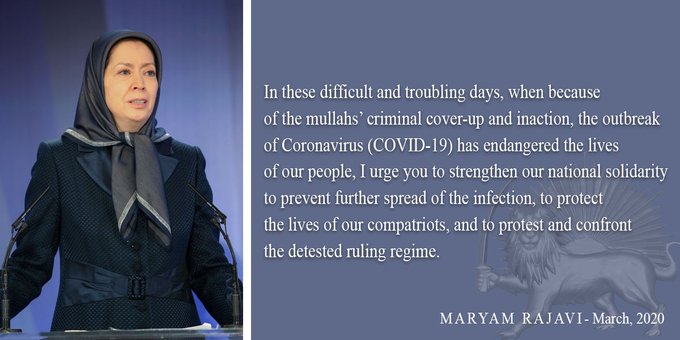 More regime officials are expressing dire concerns about the coronavirus epidemic in Iran.

“If a serious approach and necessary speed is not adopted, God forbid, we may find ourselves facing an incident equalling the proportions of the [2003] Bam earthquake and even more destructive consequences in the post-coronavirus period,” said Abolfazl Fateh, founder of the regime’s ISNA news agency.

Due to the expanding COVID-19 outbreak in the South Pars region of southern Iran, this special economic region with 20,000 workers has been shut down.

All the while, Masoud Pezeshkian, deputy speaker of the regime’s Majlis (parliament), made very interesting remarks about how the mullahs are handling the coronavirus epidemic. “We were very weak in our coronavirus management. This has nothing to do with the U.S.,” he said.

In other coronavirus news from Iran, Ibrahim Abdolrazzaqi, a senior member of the regime’s so-called reformists faction in Qazvin Province, northwest Iran, died of COVID-19 on Saturday, March 14.

The state-run Asr-e Iran newspaper reported that 15 working and retired teachers have died from coronavirus. Most of them were in Qom, central Iran, one of the hotbeds of the virus.

More videos obtained from inside Iran show people passing out in the streets and not receiving treatment from the regime’s hospitals.

Other reports show that in face of lack of measure from the government to counter the spread of the virus, the people are taking matters into their own hands and engaging in community efforts to create health masks and hygienic products distributing it among the needy.

On Friday, regime Supreme Leader Ali Khamenei assigned Chief of the Staff of Iranian regime’s Armed Forces, IRGC Major General Mohammad Bagheri, to form a “health command center” to prevent the spread of coronavirus and treat patients. However, the actual purpose is to prevent popular uprisings and protests.

Another reason for these claims is to conceal and dismiss the regime’s own role in spreading the virus. Mahan Airways, which is owned by the terrorist-designated Revolutionary Guards (IRGC), continued flights to and from China even after other countries set travel bans to prevent the spread of COVID-19. There is substantial evidence that Mahan Air was the main culprit in Iran’s coronavirus crisis.

Interestingly, before Khamenei, IRGC commander Hossein Salami had claimed that “the country is struggling with a biological attack” and said, “The virus, which may be the product of the American biological invasion, first spread to China and then to Iran and other parts of the world.”

Mrs. Maryam Rajavi, president-elect of the National Council of Resistance of Iran (NCRI), said, “These futile efforts will intensify the Iranian people’s anger and hatred over the despicable and oppressive velayat-e faqih system, which has done nothing but committing murder and plundering people’s wealth over the past 40 years. The Iranian people have stated unequivocally “our enemy is here” and “Khamenei and Rouhani are our Coronavirus.”

Khamenei’s claim about the possibility of a “biological attack” is an unprofessional hoax intended to step up their plans for clampdown on society. These desperate efforts only add fuel to the Iranian people’s anger and abhorrence towards the ominous clerical dictatorship. #Iran

For 40 years, the clerical regime has done nothing but committing crimes against the people of #Iran, killing and plundering them. Iran’s nation cries out loud, “Our enemy is right here” and chants, “Khamenei, Rouhani, you are the #Coronavirus!” #Covid_19 #CoronaOutbreak

312 people are talking about this

While regime officials claim that the number of coronavirus deaths are in the hundreds, further news and evidence shows that the scale of the disaster is much greater. In addition to the dozens of reports about dead bodies piled up in morgues and hospitals, there are now documents showing mass graves dug in different cities to bury the victims of the coronavirus pandemic.

Satellite images show an increase in activity inside the Behesht-e Masoumeh cemetery in Qom, with possibly thousands of graves freshly dug. Videos obtained by the MEK network corroborate these reports and show a long row of graves in a section that has been named “Crisis Section.”

Another report from the Khaf county in Khorasan province pertains that a massive number of graves dug on the outskirts of the Khajeh Yar mountains to bury the coronavirus victims. Ironically, the regime has only declared five casualties in this county.