Iran, November 15, 2019—On Thursday, the United Nations General Assembly Third Committee, which deals with social and humanitarian issues, adopted a resolution condemning the Iranian regime’s human rights abuses for the 66th time. Introduced by Canada, the resolution was passed with 84 positive votes and in spite of the regime’s widespread efforts to prevent its adoption.

The resolution expresses serious concern at “the alarmingly high frequency of the imposition and carrying-out of the death penalty by the Islamic Republic of Iran, in violation of its international obligations, including executions undertaken against persons on the basis of forced confessions or for crimes that do not qualify as the most serious crimes.” The Iranian regime has the highest rate of executions per capita across the world.

The resolution also raises concern at the “imposition of the death penalty against minors, including persons who at the time of their offence were under the age of 18.” The Iranian regime is also the world record holder of execution of juvenile offenders.

The UNGA’s resolution also discusses the continued use of torture against prisoners and the arrest of people who have exercised their most basic rights.

Mrs. Maryam Rajavi, the President-elect of the National Council of Resistance of Iran (NCRI), welcomed the adoption of the 66th United Nations resolution condemning the grave and systematic violations of human rights in Iran.

“Those responsible for the majority of the crimes to which the resolution has referred are the very people who have been continuously perpetrating crime against humanity for the past four decades, in particular the 1988 massacre of political prisoners,” Mrs. Rajavi said, adding that this resolution reaffirms the indisputable imperative that impunity for the criminal leaders of this medieval regime should end and all of them must face justice for 40 years of crime against humanity.

Meanwhile, Mrs. Rajavi noted that much more needs to be done about the human rights situation in Iran, which the resolution fails to mention. Some of these issues include terror attacks against dissidents abroad, suppression of popular protests, lack of political freedoms and the absence of rule of law and a functioning judiciary. Despite these shortcomings, the resolution “makes it palpably clear that the theocracy ruling Iran is the most barbaric and egregious abuser of human rights in the world today,” Mrs. Rajavi said.

Welcoming the adoption of the 66th UN censure of the #HumanRights violations in #Iran, I emphasize that impunity for the clerical regime leaders must end & they must be prosecuted. #NoImpunity4Mullahshttps://www.maryam-rajavi.com/en/item/maryam-rajavi-un-adopts-66th-resolution-human-rights-iran-regime … 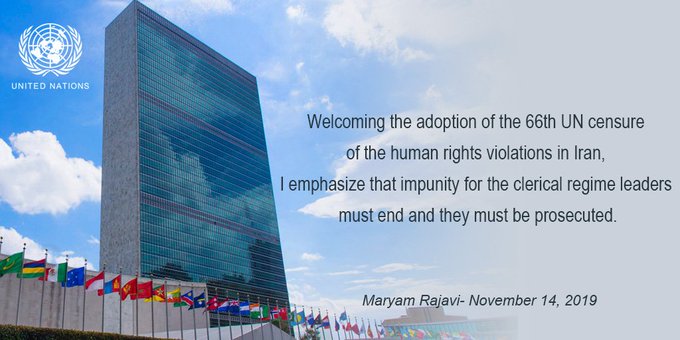 Mrs. Rajavi also called for an end to the impunity of the perpetrators of the 1988 massacre, who continue to hold high positions of power in the regime. “The UN’s silence and lack of action vis-à-vis this odious crime against humanity is a scar on the conscience of humanity. As such, an investigation into this horrific crime is the litmus test before the international community,” she said.

In 1988, Iranian regime founder Ruhollah Khomeini ordered the massacre of over 30,000 political prisoners, most of them members and supporters of the Iranian opposition People’s Mojahedin Organization of Iran (PMOI/MEK).

Prince Phillip on the role of government (Video)